Both CMA and CIMA certifications have been established several years ago. Due to this, candidates often cannot choose which certification is best for them.

Given below are some considerations to look at, which may help candidates take a clear decision:

For the CMA certification, a candidate is required to have an undergraduate degree, pass a 2-part examination, and have two years of work experience. Furthermore, a candidate can complete both parts of the examination within one year, due to the abundant testing window (of 2 months, thrice a year).

On the other hand, the CIMA certification requires a candidate to pass 15 qualifying examinations and have 3 years of work experience, apart from receiving an endorsement from his or her supervisor.

It is clear that the CMA certification will require less time commitment from the candidate’s end, but it does not mean that this certification is easier or better than the other.

Expected income as a certified professional will vary from country to country, and both these factors are essential to consider when choosing to go ahead with a particular certification.

In the USA, the national average income of a CMA-certified professional was USD112,625 (based on a 2012 survey).

In the UK, CIMA members earned GBP61,816 on an average. Though this is almost twice the national average income, it is less that of the US CMA. Applying the November 2015 exchange rate, this is equivalent to USD95,388. Thus, income in a particular country is an important factor of consideration.

The IMA has been steadily expanding its foothold across the globe and is well-known in the Middle Eastern countries and countries like China.

The CIMA certification is recognised particularly in the UK and Commonwealth nations. It has a strong presence globally.

CMA has a strong presence in the United States, Middle East, and China, and to an extent Canada. CIMA is a dominant force in the United Kingdom and other Commonwealth nations.

It is up to the candidate to decide which certification he or she wants to pursue given the requirements, earning potential, and geographical location. However, both certifications will guarantee an improved career. 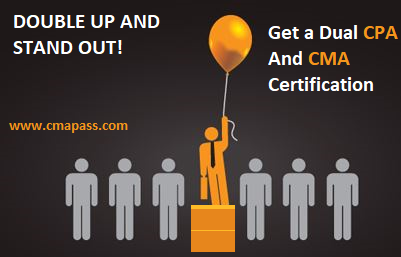 Dual Certification – What, Why

What to Do After the Exam